Showdown is coming to the UK!

British Blind Sport are looking to 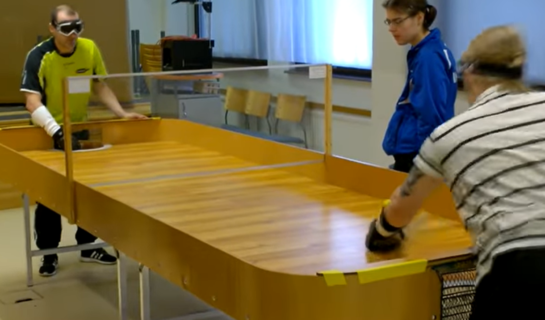 Showdown is a game designed for people with sight loss by Joe Lewis in the 1960’s. It is a fast-paced exciting game, similar to air hockey and table tennis. It is played in more than 20 countries across Europe and is also played in Africa, Asia, North and South America and now it has landed here in the UK.

The University of Birmingham is set to hold the International Blind Sport Federation (IBSA) 2023 World Games next August. Showdown, is one of the 11 games that competitors from over 70 nations will be competing in.

British Blind Sport are working to develop the game in our area and across the country. They are looking for potential players and volunteers to make Showdown a more commonly played game that blind and partially sighted people can enjoy.

So how is Showdown played?

The game is played on a specially designed rectangular table by two players who stand at each end. There is a screen across the middle and goal pockets in front of each player. Players use flat, paddle-type bats and a ball that makes a sound to denote where it is.

The aim of the game is to bat the ball off the side wall, along the table, under the centre screen, and into the opponent’s goal.

Spectators must be quiet during play, so as not to interfere with the players ability to hear the ball. Cheering is however allowed after the referee has whistled!

All players must wear eye masks for protection and to ensure they can’t see the ball making it a level playing field for all.

See this Youtube video to get a brief overview of the game (opens in a new window).

Contact our Senior Sight Loss Advisor Marc Gulwell at  marc.gulwell@sightsupportwest.org.uk or call him on 0117 322 4885.

Follow this link to find out more about the IBSA Games 2023 being held at the University of Birmingham .

To read more about the game try this Wikipedia Article about Showdown article.

Join our team as a Community Sight Loss Advisor - Vacancy

Wiltshire Sight are delighted to announce the opening of their new Salisbury Hub, which combines our very first charity shop with a services and resource centre for client appointments and...